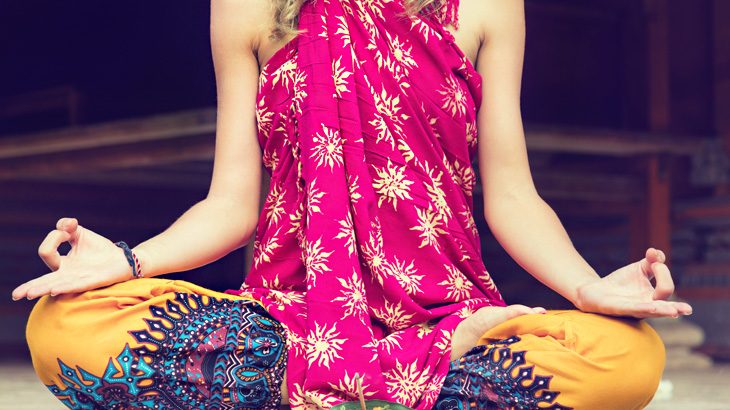 This is the yoga of devotion. It is an attractive way for the loving and emotional people as it consists of mainly surrender to God through songs, prayers and rituals. Believe in love as the way to reach God, because God sees a personification of love. For those who do not identify with Hindu religious images or gurus are invoked in the classical schools. This devotion can be directed towards other manifestations of divinity according to their beliefs, or just to others, nature, environment or to life. Bhakti Yoga can be practiced through Raja or Karma yoga.

Although it may have other connotations in the Hindu tradition, it also relates to a law of action and reaction and the cycle of reincarnation and death. The word karma in Sanskrit can be interpreted in this case simply as ‘action’. In this sense, this path of yoga is suitable for people who are dynamic, outgoing and have sociable spirit. Karma Yoga is the yoga of selfless work; one that takes place regardless of reward or retribution. It is one of the ways of yoga because the detachment of profit, delivery time, skills and effort of actions to God is a way to go beyond ego.

This path involves control of mind and body, channeling our physical and subtle energies (prana) into spiritual energy. It is also translated as ‘real yoga’ since it is based on the principles of yoga described in the Yoga Sutras of Patanjali. This traditional system of yoga is also known as Ashtanga yoga, because actually it comprises of eight steps to facilitate meditation and achieve union with God.

The best known techniques are meditation and postures; however, these are just two of the steps in this more complex system, which covers how we relate to the world as we live, in addition to other practices such as pranayama, recollection of the senses and concentration. The asanas whose practice is known worldwide as ‘yoga’ is a part of a comprehensive and traditional method for spiritual realization.

This is the way of union with God through knowledge, so it is appropriate for those who have an intellectual nature. It is said that this intellectual approach to the philosophy of yoga is the most difficult one because it requires discipline and understanding, plus the simultaneous practice with other paths of yoga such as the selfless work, strength of mind and body, as well as love toward god. Otherwise, it would not be a spiritual and theoretical and intellectual practice. Knowledge is yoga in this case when used to reach wisdom.

In this article, I will give some useful information to you for knowing how, in general, is a training course as a yoga teacher can be joined without making a wrong choice. There is a variety that is important to consider such as intensity, duration, prices and there are approaches and how to ensure good quality. So here I present practical information to give you an idea of ​​the different options and modalities of yoga teacher training programs.

Learning yoga is a journey that never ends. Therefore, it is important to know that you always remain a yoga student. In addition to this, learning for each person is relative and it may also be training since in yoga each lineage has its processes and methods. However, the contemporary world offers parameters and global institutions which determine and regulate something that is not measurable but can give us concerning alternatives and quality when deciding among many options ranging from which are authentic and which are not so authentic.

The training of yoga teachers must have a minimum duration of 200 hours as per the standards of Yoga Alliance and usually the programs that declare this duration exceed this number of hours of study, practice and teaching. The following standard duration is 300 hours for longer programs.

There are different modes regarding distribution of these hours of study. There are courses that last for a month or two, but they are residential which means that you must move to where will the course be and you should take this time to devote one hundred percent to the program. They are very intense and demanding programs because you cover the full curriculum in just one month, studying and practicing every day from early morning until night. Some of the more traditional programs require a yogic lifestyle which has to be quite disciplined and austere and can be taken in a place like an ashram. However, the range is such that there are more flexible and more comfortable programs. There are other programs that cover the same 200 hours over several months with weekly meetings with the group and teachers or in specific month or certain weekends.

A training course for teachers of 200 hours may have a cost of at least $2,000, but the price range is huge and the most expensive can exceed up to $10,000, depending on the school, tradition and the place where the course is being conducted. It also depends on how it is seen in yoga, whether as a system for health and spiritual growth, or as a business. Keep in mind that the additional cost of airfare is in addition if you have to move to another place for attending some part of the course. Be careful and informed about such extra charges if you are willing to find a cheap yoga teacher training program.